A Tale of Two Sourdough Batches

I started with some sourdough starter which I kept at 72 degrees for 24 hours. I was following a technique I found on this site by Fernando Padilla, Plant Manager of Boudin Bakery in San Francisco, Ca.  http://www.exploratorium.edu/cooking/bread/recipe-berkeley.html

I was trying to obtain some results the same as Boudin Bakery, which as everyone knows is the most famous Sourdough Bakery probably in the world. Anyway, I then used the starter the next day and mixed up a batch of dough using the recipe provided. Except that I often like to hold out on using the salt until after the Autolyse or rest period for the dough. So I made up the dough and did Autolyse. The dough was looking great. It had that just perfect feel to it. I then added the salt and stirred down the dough with the mixer. Shock! Disbelief! Before my very eyes, the dough fell apart and turned into a gooey mess! I did not mix for more than four minutes, so I knew I hadn’t overmixed. I had made a batch earlier in the week that did the same thing right after I added the salt which was Morton Iodized Salt by the way. Now I don’t know if it was the salt or the prefermented stage of warming the starter or what actually caused this gooey mess. The earlier batch I had made was so bad it had to be thrown out. I decided to save the present ruined batch until tomorrow and see if I could do anything with it, so I refrigerated it. Next, I decided to try again, but instead of using a starter which was kept warm for 24 hours, I used my motherdough which I always feed and keep in the refrigerator at 80% hydration. I mixed up the batch using the exact same recipe, only using the motherdough and a different salt this time. I had some sea salt which is what I used. After autolyse, I added the salt and the dough was wonderful.The only problem was that I now had two large bowls of dough at around 6 lbs each as I had quadrupled the recipe. Tweleve pounds altogether, approximately.

I left them out in the cold pantry which was around 40 degrees (yes, we have snow and ice laying out in the yard in Coastal Washington ! ) overnight. Next morning I brought the first ruined batch in to let it warm up. It was all full of bubbles and looked very active. Once it warmed up I poured it out and folded it a couple of times to see if I could build some strength in the gluten. It ended up feeling like a Ciabatta dough around 75 – 80 percent hydration.

I kept it well covered in flour and decided to shape some Ciabatta loaves with it. What could I lose?  My other alternative was to throw it away anyway! So I shaped it like Ciabatta and got four nice sized loaves weighing approximately 1.5 lbs each:

I was very unsure what would happen to this dough, as it may have acted like an 75% hydration dough, but it had a lot more flour in it than a dough at 75& would have.

I proofed the loaves for 2 hours and baked them and here is what I got:

The interior was not at all holey:

Here are the rest:

Believe it or not the bread was scrumptious! I got raves on it. I served it buttered with broiled Ling Cod and mixed veggies.

Now onto the next batch which I had taken out of the cold room an hour after the other bowl of ruined dough and was working with alongside with. Here is how nice the dough in the second batch looked:

It was soft, bubbly and terrific dough to handle. I divided into three pieces and shaped the loaves which I placed in a couche:

I let this dough proof while the first dough was baking. When the other dough was done and it was ready I baked them one by one. Here are all three loaves finished: 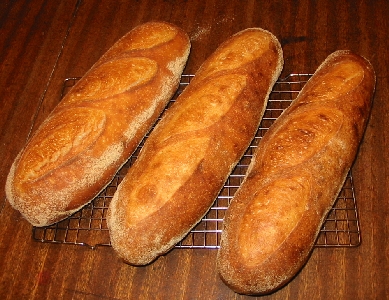 I was trying to obtain a bread similar to the Boudin Bakery bread. I was asked if my starters could make bread like theirs. I went to their site and looked up “Boudin” and that is how I found the recipe and technique. I also signed up to be a customer as I thought it would be great to have some sent in the mail to see what it really tasted and looked like. No go for me. At around 30.00 for two loaves, once they figured in shipping, it was too steep a price for me! I will have to visit them someday when I head on down the Coast and pick up a loaf or two! So I still don’t know if I even approached near to their quality, but I aspire to do so, as I am sure many sourdough bakers do. Here is a closeup of the crust on one of my loaves: 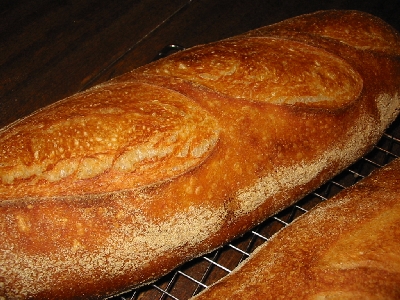 I was surprised at how similar this recipe turned out to be to my own Basic White recipe. It made me feel like I am on the right track. Anyway, the second batch of bread turned out very delicious, with a chewy, crisp, crust and soft, holey crumb. Any bread made with the motherdough smells super, out of this world wonderful.

So this is the tale of two batches of dough, mixed up on the same day, following the same recipe and two VERY different results. This is a good lesson on, “If you follow a recipe and don’t get the same results as the author, don’t always blame the recipe,”(or the author as a matter of fact). Have a great day trying to bake the best sourdough ever!