I whipped up a batch of San Francisco Basic White sourdough following the recipe at: http://www.northwestsourdough.com/recipes.html   I started yesterday in the afternoon and let the dough bulk ferment for seven hours: Here it is after I stirred it down:

I poured out the dough and shaped up three loaves which I put in banneton baskets. I put the baskets onto my cold porch which stayed at 50 degrees F all night. The dough proofed at that temperature for 12 hours. In the morning the dough was nicely proofed and looked like this: 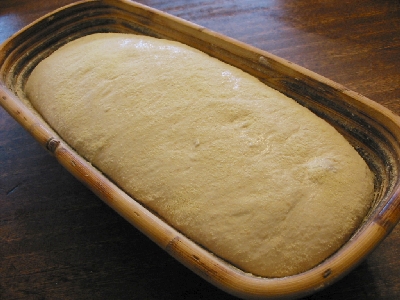 The dough was a bit sticky and tried to stick to the bannetons, which it usually doesn’t do, so I felt that the proofing was too long. I think I was right about that because the bread came out on the flattish side. Here are the finished loaves: 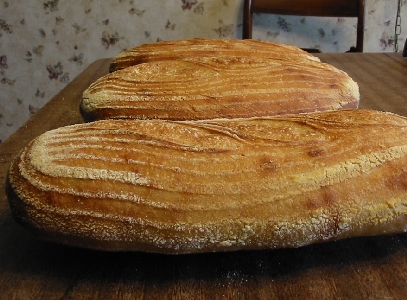 I cut it in half to use for Garlic Bread for barbeque:

The other two loaves:

The crumb is soft and open, the crust is crisp, crusty and the taste is great! Next time, I would follow the basic instructions closer, not having the second proofing so long unless it was ten degrees colder and kept in the refrigerator. I think it would have worked great on the cold porch if I had caught it at 8 hours proof at that warmer temperature. I was trying to work with San Francisco starters longer proofability. If I had bulked proofed (first rising) shorter like four hours, I think I also could have gotten away with the longer second proof.