Coastal Loaf done as a preferment

This doesn’t usually happen right after you mix your dough because we are talking about sourdough and it usually takes some time for the gluten to develop. Motherdough has been fermenting in the refrigerator for a few days, so when you use a motherdough starter, you will have some early developement of gluten from the motherdough. I like to mix on low to preserve the gluten developement and so I only mixed the rest of the ingredients on low for about 2 minutes. I then bulk proofed for 5.5 hours and the rest of the dough had also developed the gluten:

I don’t expect this kind of windowpane until the dough has finished it’s bulk ferment. If you keep mixing your dough in the initial mixing to obtain this windowpane, your gluten will then start to break down during the bulk ferment and subsequent proofing. I just wanted to show you that developed gluten shows up early when you use a motherdough starter. I am still having trouble with my Fibrament stone getting too hot on the bottom. So I decided to move it up further in my oven and that brought the bottom stone too close to the upper stone. The result was an upper crust that heated and dried out too early in the baking and caused this cracking on the crust. Also the bottom stone was still too hot, the crust on the bottom of the first loaf was close to being burnt. I had to put a cookie sheet under the other two loaves halfway through their baking to keep the others from burning too.

I may have to make a stainless or foil shield for the bottom of of my stone. I don’t know if it is the stone or the fact that it only has about a 1.5 – 2 inches clearance around the edges for the heat to circulate. I don’t have a smaller Fibrament to test and see if it is the material or the clearance. If I turn the oven down, the top doesn’t brown like it should, so I can’t turn it down. Does anyone else have this problem with a Fibrament stone or can you tell me if it might be the clearance problem?

Here is the second loaf, I moved the upper stone higher in the oven: 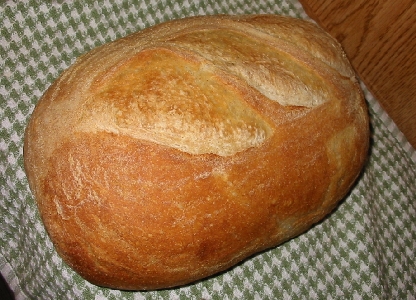 The first and second loaf weighed 1.5 lbs the third loaf was 2.5 lbs.

Here is the third loaf: 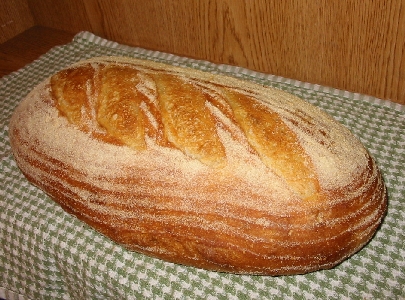 This third loaf came out beautifully without a problem once I put a cookie sheet under it halfway through the baking to deflect some of the heat from the stone.