I did up Jeffrey Hamelman’s Rye from his book, “Bread”. I used the Rye,Wheat Recipe found on page 195. I did add caraway to my dough which he did not have in this particular recipe. I also did not use any commercial yeast which he did. I made up the starter per his instructions, let it ripen overnight, then made up the rest of the dough the next day. I then let it proof and made up the loaves, which I then refrigerated overnight. This is how the dough looked after bulk fermentation:

I used my new bannetons to proof the loaves and here they are: 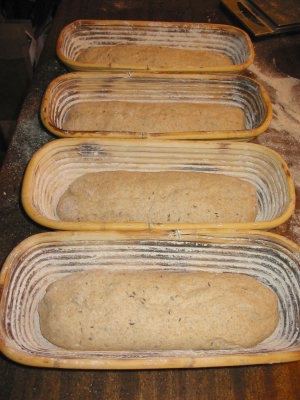 I made up double the recipe and ended up with almost seven pounds of dough. Each loaf was just a bit over 1.5 lbs. In the morning they were proofed very well and had doubled. It was hard to bring them up to room temperature without overproofing them, and two of them were slightly overproofed. However I am extremely happy with how they turned out!

Here are the loaves finished: 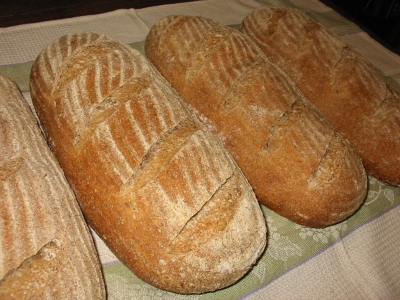 The crumb is terrific! The taste is wonderfully tangy, chewy,with a crisp crust, and a hint of caraway. Yummmy!!! 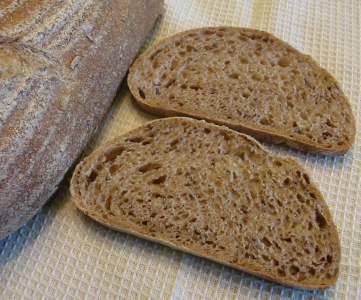 An altogether successful day! Whats more, my daughter is baking my Coastal loaf using the new bannetons and they are in the process of being baked right now! So I will have more to tell you about her loaves later.