Today I mixed up a batch of sourdough using the Austrian Sourdough starter and using a preferment made up last night and fermented overnight. The preferment had 2 cups of starter at 166% hydration, 2 cups of water, 1/3 cup of Rye flour, 2/3 cup White Wheat flour, four cups of white flour. This was not a scientific batch and I did not weigh anything this time, being in a hurry with many things to get done (including baking Molasses Crinkles for Christmas). Next morning (today) I poured the preferment into my mixer and added some oil (about 3 Tablespoons), 5 teaspoons of Sea salt, 1 cup of evaporated milk and another cup of water. Then I added a Tablespoon of non-diastatic Malt syrup and bread flour until the dough felt right and was just starting to pull away from the bowl, but still sticky. I put in around 8.5 more cups of bread flour. The dough was springy and bubbly and very alive. It was about 64 – 66 % hydration by the feel of it. The dough proofed in four hours due to the prefermentation.

Next, I divided the dough and got three large loaves at around 2lbs 4 oz each. I decided to roll the dough in different things to create a different finish on the crust. When the dough is poured out, use a minimum of flour to keep it from sticking and use a dough scraper to handle it (yes, there is some flour under that dough!)

The first loaf I shaped in a minimum of flour, to keep it sticky and rolled it in cornmeal. When I put the dough into the banneton, I spread the proofing cloth (if I decide to use one) flat over the top instead of shaping it down in the banneton. What that does is hold the flour, semolina or seeds, instead of falling down the sides and all ending up at the bottom.

Then when you place the dough onto the cloth it gently folds around the dough as it sets down into the banneton, covering the sides as well as the bottom.

For the next loaf, I decided to roll the dough in poppy seeds. I beat an egg with a Tablespoon of water in a bowl, then after I shaped the loaf, I spread some eggy mixture over the dough with my hands after I picked it up and before I rolled it in poppy seeds, which I had spread on the table. I also sprinkled the proofing cloth liberally with the poppy seeds. Then after it was nestled in it’s cloth, I sprinkled more seeds over the top. After that I rolled the next loaf in Sesame seeds.

Here are the three loaves all rolled and ready to proof: 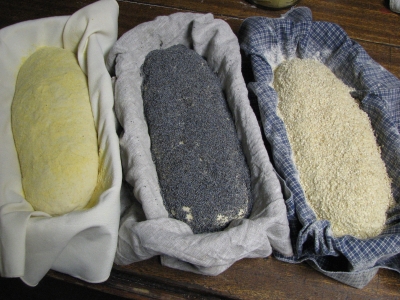 I put one loaf on my cold porch which was about 55 F degrees, I put another loaf in the fridge and left the Cornmeal loaf out at room temperature. That way all three loaves wouldn’t be ready to go into the oven at the same time. I took the loaves out of cold storage after about 45 minutes and let them continue proofing at room temperature. The loaves were baked in a hot 450F degree oven on top of a baking stone and with a roasting lid covering the dough for the first 15 minutes. This is how the bread looked when finished:

Here is the loaf rolled in Cornmeal:

Here is the loaf rolled in Poppy seeds:

Here is the Sesame seeded loaf:

Here are all three, they are the same size, the camera angle makes them look different sizes.

The bread is some of the best I have ever tasted. It is great Austrian Sourdough. The crumb is soft, springy, chewy, tangy, sour. The crust is covered in flavor via the seeds/cornmeal and was thin and crisp. The bread has the most delicious aroma and flavor. It was so nice that I have made up some motherdough again using the Austrian starter. I will be experimenting with that soon.