My new recipe is called Asiago Cracked Pepper Loaf. So far, the raves have been for the outstanding flavor of this sourdough bread. I added cracked cornmeal and some Rye flour to this dough and the bulk proofing was pretty fast at 3.5 hours. So I decided to make it a one day bread, hoping with such fermentation that it would still have a good sour. It does! I could have made two large loaves, but decided to make three smaller loaves instead. The recipe made a smaller amount of dough than my usual recipes. I mixed up the dough and had it bulk fermenting by 1:00 pm. I could tell it was raising fast. I knew it would reach the top of the bowl when it was overproofed so I mixed it down and poured it out:

I kneaded it just a little and rolled it into a ball:

Then I cut it into three pieces: 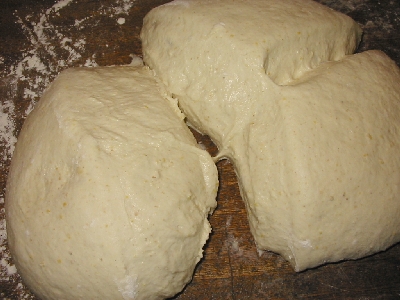 I got some cracked Black Pepper and Asiago cheese ready:

I saved a small piece of the cheese for grating on top of the finished loaves. I should have bought more cheese though. This was about 6 oz of cheese and I think 12 oz would have made  cheesier loaves. The dough pieces were resting and so I took them and stretched them  into a rectangular shape and pressed in the cheese and pepper.

I then shaped the dough into loaves and put them into bannetons: 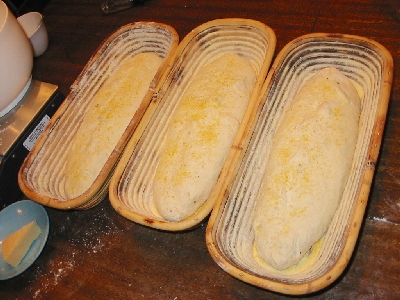 I sprinkled some of the coarse cracked cornmeal around the dough. I could see the cheese and pepper peeking through the dough. I let the dough proof for two hours at room temperature and then popped the first loaf into the oven, here it is:

With the second loaf I sprinkled the topping cheese on when it was still in the oven instead of afterwards like I did for the first loaf:

Here is the third loaf: 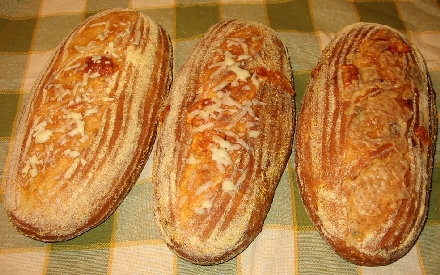 The bread sat up high and has a great crust. Here is the crumb:

This bread has an incredibly good flavor, its amazing used for sandwiches and awesome as toast. This recipe will be available in the Special Recipes folder.