I made a batch of Sourdough Vienna White Loaves yesterday. I modified a recipe posted on northwestsourdough yahoo forum by Don. Instead of a seed starter, I used my motherdough starter again. With the seed starter, you build up a "seed" of dough to add to your main dough. You start the seed dough the day before, then add it to the main dough the next day. I just added the motherdough I had and mixed up my main dough ( I quadrupled Don's recipe). I let this proof for 6.5 hours.I knocked down the dough, added the salt, and formed loaves. Each loaf weighed approximately 1 lb 3 oz. Here is a picture of the formed dough set up to proof: 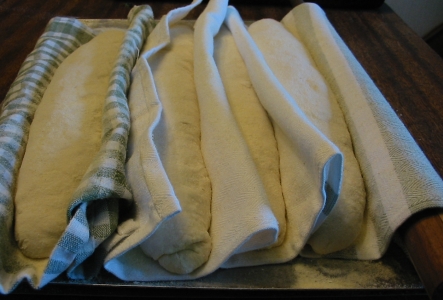 Here is the dough 2.5 hours later just before I popped two of them into the oven:

The strange thing is, I was worried because the dough seemed right on the verge of being overproofed, how would I ever get the second two into the oven in time…but I was wrong! I baked the first two for 35 minutes and here is how they came out: 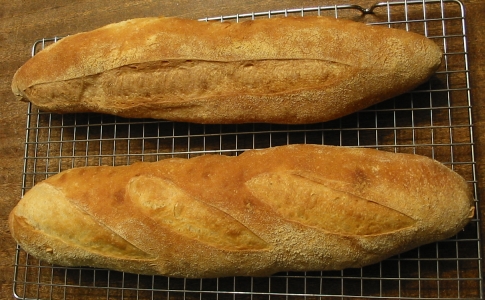 They came out really nice but the slashes didn't bloom so I figured they were overproofed. The next two loaves were popped into the oven, but then was I surprised when they were done:

The loaves must have been perfectly proofed because they bloomed wonderfully, the slashes got "ears", the color was fully developed. So much for being overproofed!

I will post the recipe and interior pictures later.

Here are the interior pics: 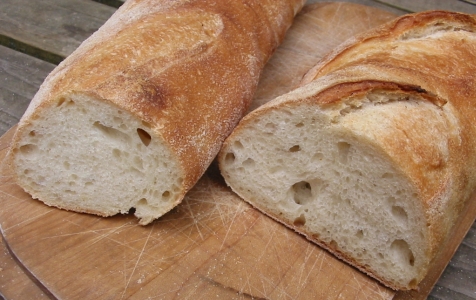 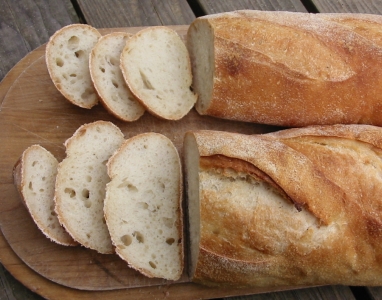 The taste is so good! It is like a good French loaf. The basic ingredients I used were :

This made four loaves at approx 1 lb 3 oz each.

I received a request to show the interior of the other two loaves with the lengthwise slashes, here they are: 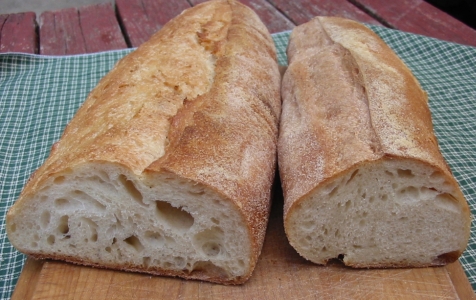 The loaf on the left in the two upper pictures was baked about 1/2 hour after the first loaf done on the right, it was also baked at a hotter temperature of 425 degrees the one on the right was baked at 400 degrees, both were started out at 500F for the first five minutes. The dough was made at the same time from the same batch. They were the same weight. The only differences were the 1/2 hour longer proofing for the left loaf and the hotter temperature.