A customer of mine has asked me to make up a sourdough pizza dough recipe. He gave me his to convert, but I felt like being creative so I …

Made a preferment at noon with (this was fermented at room temperature):

Next day at noon I poured this preferment into my mixer and added:

I mixed the dough until the ingredients were well incorporated and then let the dough autolyse for 15 minutes. Once done autolysing, I mixed the dough for another minute on low speed. The dough really looked great. I let the dough bulk ferment for another four hours and then made up the pizzas. The dough weighed 5 lb 10.6 oz  and is a stiff dough at 58 % hydration although the extra oil makes it easier to work. It could have made up three large pizzas, but I let the little ones make up their own pizzas and I had some dough left over so I put it into the refrigerator to try out something tomorrow with “old dough”. I made up two large pizzas with the diameter of 16″. I was preheating the oven at 550 degrees with the baking stone two racks from the bottom. The pizza dough felt really smooth and silky, yet stretchy: 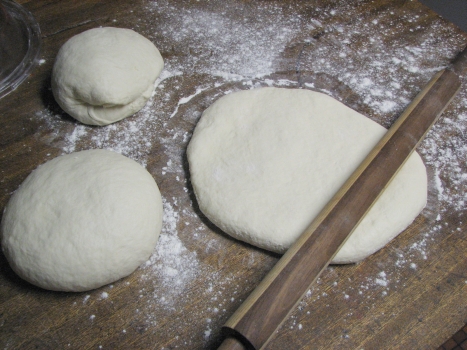 I had made up the sauce and simmered it for two hours to thicken and distribute the flavors.As for the sauce, I just winged it and added two cans of tomato sauce,some oil, a heaping tablespoon of minced garlic, some garlic salt, some onion salt and some Italian seasonings. It tasted great! My daughter prepared the toppings, which were, onions, olives, mushrooms, sausages and of course cheese. I didn’t have any Mozarella cheese, just Cheddar cheese. After I rolled out the dough some, I let it rest for a while so it could be handled easier and I could roll it the rest of the way. I made up two little pizza doughs for my little kids who don’t like anything on their pizzas 🙁 and let them put on the cheese. I baked their pizzas first : 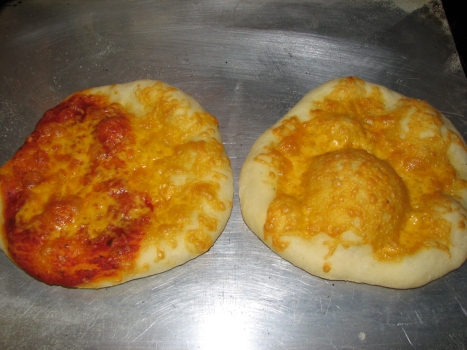 I baked them by making sure there was plenty of Semolina under the dough and then I whisked them onto the hot pizza stone. For the larger pizzas I did something similar. I allowed the dough to raise for a while, about twenty minutes, spread oil over the top of the dough, and then I pulled, whisked, the dough onto the stone and baked it for three minutes to allow it to bubble up and set the top, after which I took it out using my nifty pizza peel ( I got one for Christmas!) and added the sauce and the toppings and then popped it back onto the stone for another 7 minutes. 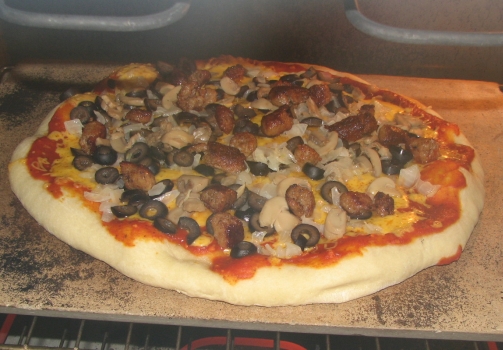 (That’s burnt Semolina on the stone)

I placed the dough right onto the stone which was easy with the crust already somewhat set. Getting the raw dough onto the stone the first time was a feat though, just make sure you use plenty of semolina under the dough and it will be easy enough. By the way if the pizza bubbles up with bubbles that are too large, simply take a fork and poke the bubbles down. The pizzas were the best I had ever made and I got a lot of raves for them. They did suggest however that I didn’t exactly have it down EXACTLY right and maybe should experiment a LOT more to get it just right… 🙂 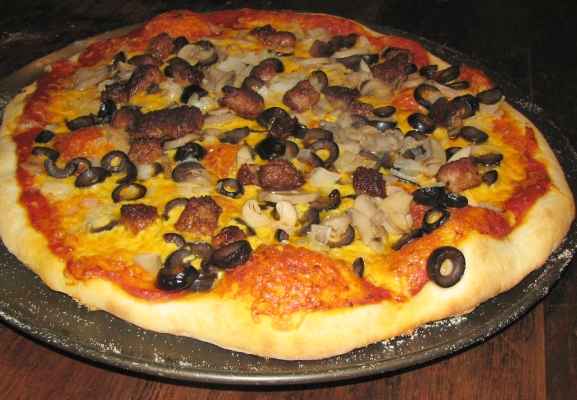 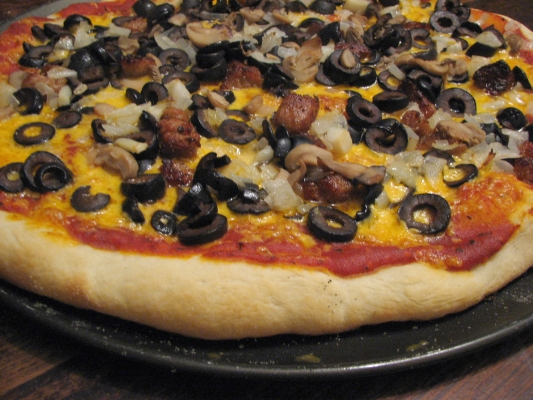 I really will have to experiment more with the pizza dough as it is really great to have it turn out so nice. Crisp, yet chewy, large bumpy holes, yumm! I have to thank Donald Hrascs for sharing his experiments with pizza dough with me and inspiring me to bake up pizzas tonight for dinner, my family thanks him too!

Sourdough Pizza with a Bubbly Crust